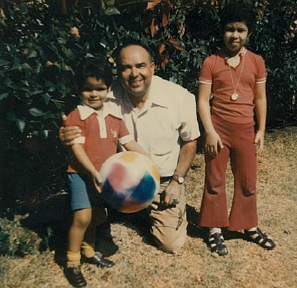 My father, Manuel Ellerbrock, was not just strong minded but in the eyes of his oldest daughter, he was bigger than life.

All my memories of my father are reminiscent of the movie stars of his time. He was born in 1927 and 17 years older than my mom. He was 39 when I was born. They were to have 3 more kids after me, much to my dismay.

In total we were a family of 6, the four kids and my parents. Everything he did was always bigger than life. I never remember doing anything small. He taught us values and respect. We were raised “the old fashion way”

He had a sense of humor and was extremely smart. He taught us many things. Growing up we would listen to classical music and yet we would also sit and watch the 3 Stooges. Mother did not approve!

As life passed and we grew up, I moved away and would visit my family as time would permit.

We were dealt a devastating blow when my little brother, their only son was killed in an accident when he was 18 years young. That is when I started to notice my bigger than life father was brought to his knees. It was the first time I had ever seen him cry and it was the very first time that I noticed, ever so slightly that he was not invincible.

We put the pieces of our family back as much as we could, I visited more often and every visit I noticed it. Something was not quite right. I thought it was the grief he and my mom had suffered. Losing their only son.

Every visit was more and more noticeable, and I could not put my finger on it. The family would vacation in Vegas once a year or so. They would drive and spend a week. I remember it as clear as day, it was Spring of 1994. He did not want to go on vacation. He did not want to drive. He said he was tired.

My father, my sisters and my mom went anyway. He decided he did not want to disappoint them and cancel their annual vacation.

I went to see them when they got back. There it was again. He was slimmer, a little worn. I asked him what was wrong. He said nothing, just a little tired. As the year progressed, he started to look different, a lot thinner, tired all the time. As any wife, my mother made him go see a doctor. There it was. That dreaded word. The “C” word had entered our lives.

He was diagnosed with stomach cancer. He spoke with me and made me promise to always look after my sisters and my mom. I am sure he had the same conversation with each one of us.

His appearance drastically changed, every time I saw him. Thinner, older a shell of a man that I remembered.He had surgery, unsuccessful. They tried to get it all, but it was not to be. He fought as much as he could but decided he just wanted to be home. He felt it a burden if he left medical expenses. He wanted to be home and just be with us.

I went to see him– I expected a change as it had not seen him in a few weeks. I was not prepared for what I saw. He was not recognizable. My father, the father I grew up was not there. His voice had even changed. We sat for hours talking, listening to music, and just remembering our adventures.

He was ready. I could tell. I could not bring myself to admit it, but I knew. It was a matter of time. I kissed him, told him I loved him. For his sake, I told him we would be okay. It was alright to go.

Just 3 days after Thanksgiving, September 27th, 1994 he took his last breath in the arms of his wife.

I got the call the next morning. I knew. Nothing needed to be said. I asked my mom if he was peaceful and she said yes.The dreaded “C” word affected my family in more ways than I could have imagined.

Do not let them die in vain.