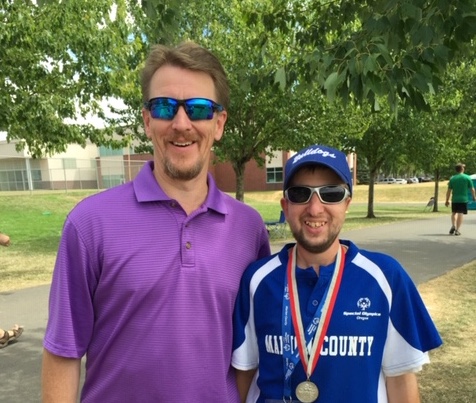 Michael was born a happy healthy baby on 2/21/1989. He was growing and maturing like any normal toddler would and all seemed well. When he turned 3 things started to change. He began to have headaches until he started to get them so bad that he would lay on the floor pounding on his head saying make it stop, make it stop! Eventually he would pass out and sleep for a while and he would be better. We took him to our doctors, but they were just saying that he was getting migraine headaches like me, his father.

A month before Michael’s 4th Birthday, we finally got a doctor to do a CT scan, which we felt he was just doing to appease us and settle us down. As Michael was getting the scan done, we were sitting in the room with the tech. As the test went on in the testing, we could see the look on the tech’s face change and the color drain out of his expression. We asked him what he was seeing, and he said that he couldn’t say anything, but the doctor would talk to us in just a few minutes.

As we sat down with the doctor and he told us that there just is no easy way to say this, but they found a tumor on Michael’s brain stem. He told that we need to take these scans with us and immediately head up to Doernbecher Children’s Hospital at OHSU. The best pediatric brain surgeon in the United States is up there now, but he is getting ready to leave on a family vacation but that he was Michael’s best chance right now.

When we got up to Doernbecher and got out of the elevator and we passed a gentleman at the nurses station. We told the nurse what doctor we were looking for and she said you just passed him. We ran back to catch him at the elevator and told him that we were just sent up with these scans for him to look at. He took a few minutes to look them over and told his nurse to call his wife and tell her that he couldn’t make the flight for their family vacation, because this child needs immediate surgery.

The doctor sat us down and told us just how bad this tumor looks and that they needed to perform surgery to remove it as quickly as they could. He told us to go home and pack a bag and come back in the morning and they would get everything started into motion. The day after we got Michael back up to Dorenbecher they performed the surgery. It took 9 hours to perform and they ended up leaving 3% of the tumor in there, because they felt they had touched and cut on the brain stem as much as they felt comfortable with. They were afraid that if they did more that he might not be able to talk, or walk, or see again. Before the surgeon was done, they were having the parts of the tumor that were removed tested and the results were that it was all cancerous.

Talk about kicking you while you are down! Those horrible words, your child has cancer!

Not long after Michael got out of the surgery, he said where is my mom and dad and where are my underwear! We felt good that he could talk and see, but we did have to teach him to walk again. We spent two weeks up there at Dorenbecker before we were able to bring Michael back home, but the doctors told us that he would have to go back up for 6 weeks of radiation and then two years of chemotherapy. They told us that the treatment they were giving Michael was what they give to adults, but it is the only way they know to take care of the remainder of the tumor that was left on his brain stem.

Our doctor sat back down with us and explained that when Michael was getting the headaches, it was the tumor squeezing the brain stem and that after Michael would pass out, the tumor would release and he would be out of pain. They also told us that the tumor that they removed was 1/3 of the size of half of his brain and that if they hadn’t have performed the surgery, he would have died within two weeks to a month.

As we went through the radiation and chemotherapy the doctors told us that we needed to be realistic and that we should enjoy our time with Michael, because his life expectancy will be around the age of 10.

Well, this year we celebrated Michael’s 30 birthday and he is brain cancer FREE! Some of the side effects of the radiation and chemo was that it would deteriorate the small bones in his ears, and it did. He has to wear powerful hearing aids to be able to hear. Another was that his brain was not able to grow and function normally and he has cognitive brain delays and that he will be that of a 10 to 12 year old for the rest of his life. Michael is a wonderful young man and we will have him under our roof for the rest of our lives. And we hope that is for a long and very full lifetime!