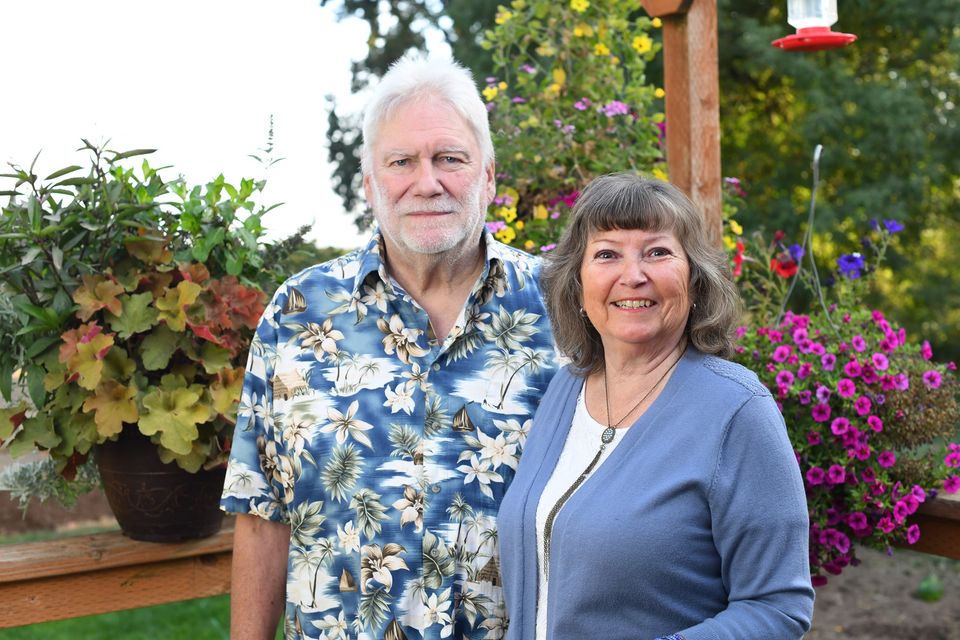 (told by his wife, Carol)

It started out as a routine checkup a week after his 68th birthday on January 29, 2020. When his doctor did his usual check of the lungs he paused and said, “Hmm… I don’t like the sound of that”.  From that observation, an Xray followed the next day, then a CAT scan, then just a few days later an MRI.

A week after that observation, Gene and Carol were sitting in a urologist’s office being told that Gene had kidney cancer. “Are you sure, how could you know?” they asked  The mass on his kidney measured 12.1cm X 9.1cm X 10.8cm. Gene was referred to Oregon Oncology at Salem Hospital.  A PET scan confirmed that the cancer had metastasized to his lungs. Plus a biopsy a month later confirmed it.

Following diagnosis, Gene started a common immunotherapy treatment with Axitinib (Inylta) and Pembrolizumab (Keytruda).  In addition to the treatment, the team decided it was best to surgically remove the tumor and the kidney along with it in June 2020.  Side affects from the Axitinib led to a second treatment starting in November of Interluekin (IL2).  It was extreme but sometimes effective treatment that was performed at Providence/Franz Cancer Center.

The treatment was beneficial but after 3 rounds it had done all it could do.   Bring in the Nivolumab (Opdivo)  Ipilimumab (Yervoy)  immunotherapy treatment next, which was helpful, but not enough.  Giving up was not an option so on Dr.’s suggestion, Gene consulted once again with Dr.’s on a trial study he was involved in.

(ALLO-316-101 is a Phase 1 multicenter study. They are evaluating the safety and efficacy of ALLO-316 on subjects with advanced or metastatic clear cell renal cell carcinoma.)  Extensive tests were performed to ensure that Gene was an acceptable candidate. On September 15, 2020 he began his inpatient treatment of the pre-treatment infusions, which included chemotherapy. On September 20, 2020 he received the CAR-T infusion.  Gene was constantly monitored for side effects. On September 25, 2020 was well enough to be released to local lodging until September 30, 2020 when he had a biopsy on the lung tumors. Following the biopsy he was happy to return home to continue to recover from the treatment.

They live with hope, not just for themselves but for the success of the treatment for others that suffer from this disease. Gene and Carol are grateful to the great medical staff at Oregon Oncology, Providence/Franz Cancer Center 7N and especially the doctors he worked with.

(Editor’s note: Gene is only the 4th person in the world to participate in the ALLO-316 study.)