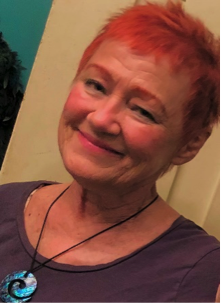 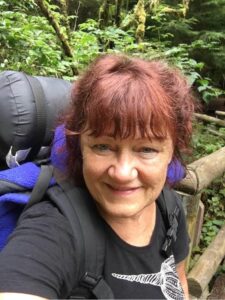 Several years into my dream job as a volcanologist in 1988 I answered the phone late at night as duty seismologist at the University of Washington Geophysics Seismology Lab. The news media was calling about a possible series of earthquakes being felt by Bellevue residents. While answering the phone I brushed my hair back over my shoulder & was distracted by a marble-sized lump below my collarbone. I drove into the lab & dealt with the event & headed home. I called my doctor first thing in the morning & he removed the lump. A couple days later he called at night asking me if I was sitting down. I was only 38 & he told me it was breast cancer. Who gets BC at 38, I thought? It didn’t make sense. Thus, began a lifelong journey with an uneasy companion called Cancer. Every time my companion returned, knowledge & technology had advanced & every time I dug deep to fight again with new tools.

During this time, I changed jobs cautiously, afraid to risk my healthcare insurance at a time that pre-existing conditions could be used against you by insurance companies. I became the FEMA Regional Earthquake/Volcano/ Tsunami Program Manager. Then I became the Mitigation Branch Chief where I balanced working and fighting breast cancer once again at age 50 in 2000.

This time around I learned my father’s father’s family had a long history of breast cancer where generations of mothers, aunts & sisters died at the magical age of 38 in the days before early detection, modern chemotherapy and radiation treatments. The family history was interesting enough to a maverick young female scientist who thought genetics might play a role in breast cancer that my family was chosen to be part of her study.

This scientist, Dr. Mary-Claire King, had discovered that chimpanzee genes matched 99% of human genes, that humans passed breast cancer genes down through generations, and used genetic sequencing to identify mass murder victims in Argentina. During the second breast cancer episode my grandfather’s brother’s grandson (who lost his mother & sister to BC at 38) found out I also was going through BC treatment. He was excited and told me that Dr. King wanted to test my genes.

During this time another of my grandfather’s brother’s granddaughter (who lost her mother & aunt at 38) was going through treatment for a recurrence also and I told her, “Do you realize we are the first generation in our family that has survived beyond BC at 38 due to early detection & treatment?” I thought it was harsh treatment but was able to learn to stand-up paddle board while on chemo. 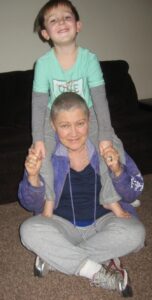 Twelve years later at 62 I was attending a painting seminar in Costa Rica when my chest began to feel sharp pains and I knew my companion had returned. This time I thought I’d rid myself of my companion by having a bilateral mastectomy.   Unfortunately, one of the chemo drugs triggered a skin cancer I had cut out. I was so happy to be done journeying through life with this uneasy companion! 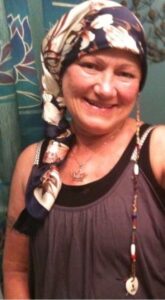 Now it’s seven years later at 69 in 2019, I caught a bad flu only to find out it wasn’t the flu, it was leukemia likely brought on by one of my 2000 chemo drugs for BC. The earlier episodes were easy compared to the 2019 treatment that threatened my life. There was no paddle boarding capability. At one point the physical therapist pulled me from my hospital bed, put a strap around my chest, hauled me out into the hall & made me walk. I spent a couple of months unable to go downstairs at home to do laundry. Within months, a miracle cure appears to have happened in response to a stem cell transplant and the hardest fight I’ve ever waged against my cancer companion.

I can tell you my tools in this fight – attitude, family and friends, heroes, humor, art, music, food, exercise. An old friend recently asked, “They just can’t kill you, can they?!” “Absolutely not! Never give up!” This episode forced me to retire as fighting was a full time job without the stress of being Director of the Grants Division too. But I love the drastic turn my journey has taken and I love and treasure every moment of my new life. I don’t know why but I’m pretty sure I’ve been saved to do something with the rest of my life and I think part of it is helping others get through this.