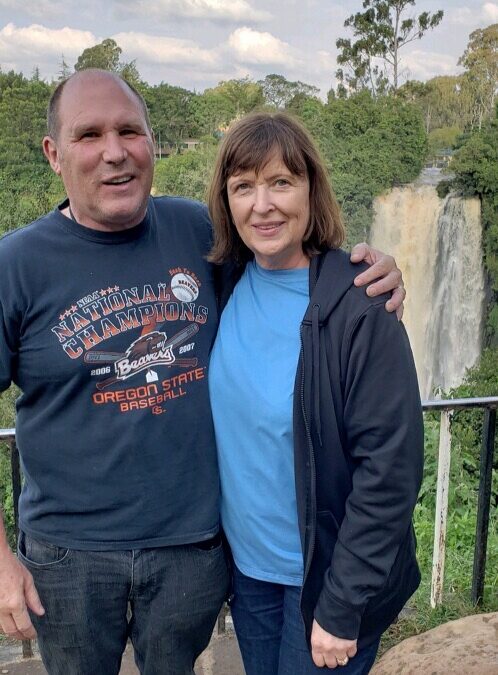 On Valentine’s Day of 2021 my wife and I went to Mt. Bachelor in Bend for a week of skiing. We bought our week’s tickets and went out to our car to get ready to go skiing. I started to put on my ski boot. As I was jamming my foot into my right ski boot when suddenly my right femur snapped in half. When I got done screaming in pain I turned to my wife and I told her that I have to have cancer because you don’t break the strongest bone in the body putting on a ski boot. I had to stand on my left leg holding the car door for an hour and half waiting for an ambulance. I was in extreme pain in spite of having received 2 shots of morphine by the ski patrol. I stayed in St. Charles hospital in Bend for 9 days. While I was there I had a rod put into my femur and I received a CT scan. I was diagnosed with stage IV Renal Cell Carcinoma in my left kidney that had metastasized to my right femur. In addition, there were 4 tumors on my lungs, tumors on my right and left adrenal glands, a large tumor behind my spleen, and suspected other tumors present in my abdomen.

I needed a medical transport to reach home from Bend to Turner Oregon. I told a very close friend of mine from my church that we needed to come up with $1,500 to get home using medical transport. In just half an hour my friend raised the money to get me home.  When I returned home I was in a wheelchair (purchased by my church) as well having to use a walker.  I was unable to walk, so my church members fitted my house with ramps and bathroom fixtures so that I could get around okay. It was so amazing to have such great friends come to my aid and show me such great love. I could never thank them enough.

Shortly after getting home I went to Compass Cancer Center for treatment. I met with my doctor there, who is an amazing doctor. He told me that first day that people with my diagnosis live approximately 18 months to 2 years. I was 71 years old then but as a retired chiropractor I had always taken very good care of myself. He told me because of my good health I would probably exceed that. He has put me on a course of treatment called immunotherapy. It is different from chemotherapy in that it builds up your own immune system to fight the cancer. It is a relatively new treatment protocol. It is extremely effective against renal cell carcinoma and melanoma. They believe that the cancer is now gone from my leg.

I had a PET scan in September that revealed that all the smaller tumors were completely gone from my adrenal glands and my lungs. The one behind my spleen was 38% of the size it was in March and the one on my kidney was 50% of the size it had been. Then in the first week of December I had a CT scan which is different than the PET scan. This study revealed that the tumor behind my spleen was gone leaving only the one tumor on my left kidney.  With this study they were unable to measure the size of that tumor, however, it did reveal that it was decreasing in size. At this same time, I had x-rays of my right femur. It showed that it was healing but not yet fully healed. I was told that it takes a year or more to achieve a complete healing. During one of my visits with my oncologist he told me that I am way ahead of the curve and that I’ve responded so well that he feels I have many more years to live.

Another contributing and the most important factor about my recovery is prayers that are being offered on my behalf. Shortly after I got home from the Bend hospital, I was on the couch with my son who is a pastor up in Washington. He had come down to help me get settled with my new disabilities. We were streaming his church service and the teaching by the head pastor that first Sunday I was home. The message was about David and Goliath. My devotional that same day was also about David and Goliath. I immediately declared my cancer as my Goliath and that no uncircumcised Philistine was going to beat me with God’s help and leading. My first name Patrick means Noble, and my last name Owen means Warrior!! This Nobel Warrior with God by my side is defeating my Goliath!!!!

In a prayer meeting at my church after I returned home from Bend I was prayed for. A woman there told us that while praying she had a vision of the cancer flowing out of my body and that I was going to be healed. The pastor’s wife told me at this same prayer meeting she also had a similar vision. I have been on several mission trips around the world. I have a group in Mexico praying for me and in the Dominican Republic. The most amazing group praying for me is in Kenya. On a mission trip there, led by my sister, we met a young woman named Fridha. She learned through my sister what I was going through in March of last year. She immediately emailed me and told me that she was forming a prayer group that was going to meet every Saturday night to pray for me. That group is still meeting. In fact on December 29th she had the group call me with her pastor and prayed for me over the phone. They also prayed and fasted that day for me! What a huge blessing that was!!! I have family and friends all over the country that remind me constantly that they are still praying for me. I am truly blessed. God is good for sure.

I prayed to God one night and asked Him if He really wanted to call me home why do it with cancer that takes a long time, with lots of suffering, and very expensive. My prayer was, Lord just take me in a car accident. It will be faster, less painful, and less expensive!  I have come to realize that even as our bodies decay and waste away God is polishing and perfecting our insides. My work is not done!! I have blessed so many people with my story, guidance, and my testimony. God is not done with me yet.

The first week of March I have another PET scan coming up. I am praying that all the cancer is going to be completely gone and my leg will be completely healed. (After all I do want to go skiing again.) I am then faced with the decision whether to have my left kidney completely removed or not. The doctors believe that would be the safest course of action to prevent a reoccurrence. I am praying about that and seeking God’s wisdom and guidance.

That is my miraculous story of following God’s leading and so many answered prayers.