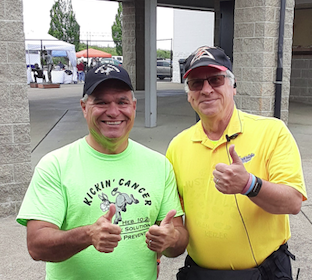 I was born (1956) and raised in Southern Oregon in the town of Grants
Pass.  My time as a child was spent mostly outside running around the
neighborhood or playing sports.  We had a wooded area directly behind
our house to start out with.  This later was cleared and a sports field
was build for the local high school (JV football field with a track
around it).  There was a baseball field just down the street with tennis
courts next to it.  There was also a community pool (Caveman Pool) on
the corner.  I spent a lot of time swimming, playing tennis, riding
bicycles or just playing around the neighborhood; this was all without
sunscreen – because it wasn’t really used then.  I would often get
sunburned, peel, and then burn again, but not as bad as the first time
and it usually tanned after that.  This went on year after year.

In school, I was a runner (cross country and track), a tennis player, a
football and baseball player. After the baseball season ended I would
then join our church men’s softball team.   In my free time, I took
advantage of my dad’s country club membership and played a few rounds of
golf when I was able to drive myself there.   And I still did a lot of
swimming and other activities.  Needless to say, I was still outdoors a
lot and getting lots of sun.  Once sunscreen started to be used, I still
did  not use it that often and would continue to burn at least once a
year.  This actually went on through college where I played intramural
sports (tennis, soccer, football and softball).  I thought nothing about
getting skin cancer due to too much sun.

Even as a young adult and though most of my life, I continued to be
active with a lot of outdoor activities, usually without thinking too
much about applying sunscreen.

In the middle of 2020, I noticed that I had developed a black spot on my
face that I thought was a pimple or other wound.  The weird thing was
that it never bled and it didn’t develop a head like a pimple but it
sure itched.  I decided to mention it to my doctor when I went in for my
routine physical late that year.  He took one look at it and referred me
to a dermatologist after taking pictures of it to send to him.

OnJanuary 4, 2021, I went to see the dermatologist who took one look at
the spot and said, “Yep, that looks like a basal cell carcinoma.”  He
gave me two options.  Either scrap it off now with a razor with local
anesthesia which had an 86% survival rate or make another appointment to
come back later and have it taken off by scalpel which would leave a
smaller scar and had a 94% survival rate.  Either way, he was going to
send it in to the lab for testing to confirm it was cancer, but he was
real sure it was.  I figured, I’m here, there’s not much difference in
the survival rates, let’s just take it off now.  Which he did.  About 4
days later the results came back from pathology stating that it was
indeed basal cell carcinoma.  I recently looked back through photos of
myself and found that the cancer had first appeared very early in 2020.

I just don’t really want to think about what might have been if I had
not said something to my doctor and had him look it and get a referral.
I am due for my follow-up appoint in early April 2022.  I hope and pray
that we got it all and that nothing else has grown in the meantime.  You
can bet I use sunscreen now!