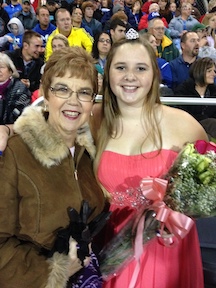 This story about Sue Juran is written from the perspective of her youngest granddaughter, Claire.

I first want to start off by saying my amazing grandmother was a passionate follower of Christ, a great wife, a loving mother, and an overly fun grandmother.

The summer of 2013, Sue constantly felt ill. She started to stay home more often, miss events, and even a few church services; when she missed church, you knew something was wrong. She went to the doctor several times to see what the cause of the illness was, and they ran some tests in early November 2013. The results came back about a week before Thanksgiving that year, my favorite holiday. I learned that my favorite person, my grandma Sue, had breast cancer. I was upset, I cried, I was in shock and upset with God about why he would give cancer to the Godliest person I knew. She was always the one in the family making sure she ate healthy and that others around her were trying to eat healthy also. After some thought and talks with God, I remembered who my grandma Sue was.. She was tough, strong, brave, and above all else, COURAGEOUS. In my mind there was nothing my grandma couldn’t get through- she was the strongest person I knew; the most wise, humble, genuine, loving woman who always had a scripture to share that would go with what you were going through. I just knew my grandma was going to be okay. She had to be okay.

Before Christmas, every year my grandma Sue would ask all her kids and grandkids to give her a word that they wanted to work on or represent them in the coming year. Then Christmas day she would give everyone a scripture that she thought best fit them and their word for the year for them to look at and read to keep them going each day. Each year she would pick her own scripture as well. For the year of 2014, my grandma chose the word COURAGE. For Christmas that year I made her a pink breast cancer ribbon blank that she could take with her to hospital trips and I picked a scripture for her myself; I chose Joshua 1:9 “Be strong and courageous. Do not be afraid; do not be discouraged, for the LORD your God is with you wherever you go.” Those scriptures and words were special each year and to give her a scripture was special to me.

January 2014, my grandma had a mastectomy to try to remove the cancer. She then started chemo and in my naïve eyes, I thought everything was going to go back to normal. To be completely honest, I don’t remember too much from February to March 2014 because in my mind I thought my grandma was getting chemotherapy, her hair was falling out, but that she was beating this cancer thing. MAN WAS I WRONG. Here it is May 2014, the chemo that they had been giving her the past couple months, had completely burned her lungs and she is now on a ventilator. She can’t talk to us.. she has a big tube down her throat. We brought her Ipad so that she could type out messages to us when she wanted; there was almost always someone in her hospital room with her, my grandpa, one of my parents, my sister, one of my grandma’s three sisters, our pastor and his wife, myself, my aunt, the list goes on and on. She was almost never alone. One day my mom and sister were in her hospital room with her and she started waving her hand, motioning that she wanted to type on the ipad, my mom thought that she was asleep, but she must have just woken up so my mom hands her the ipad. My grandma was so weak when she would type so you would have to start guessing what she was typing because she wouldn’t hit the right the letters and it would be gibberish and she would get tired before she could finish. She started typing “It’s wond”, in gibberish, so my mom asked, “It’s wonderful?” and my grandma shook her head yes and then began to type, “I’m free”, my mom tells her ,”Don’t go anywhere, everyone isn’t here yet.”

The next day, May 17th 2014, was the day the ventilator was being taken out. They told us that my grandma would probably have a few minutes with us after the ventilator was removed to say our goodbyes. Once the ventilator was removed, we allowed my grandpa to have his time with my grandma alone. The ICU has a rule where only a few people can be in a patient’s room at a time, but the people there loved my grandma. Everyone that met her adored her. On that day, there was no limit of how many people could be in that small hospital room. Our pastor, his wife, my aunt, uncle, parents, my grandma’s three sisters, my three siblings, sister in law, I’m probably missing people, but there were several of us packed into this room. My grandma Sue spoke to each one of us grandchildren individually first and told us how proud she was of us and how much she loved us and stuck something personal into each goodbye. She personally said a heartfelt goodbye to each person in the room. She then asked us to sing to her and all of us just looked at each other with a blank stare as to what song to sing… What song did all of us know? We tried one, I don’t remember what it was, but I do remember her telling us, in her faint hoarse voice that we sounded horrible. That is one thing she never lost during this whole thing.. she never once lost her sense of humor, which one of her best traits. We finally came to the decision to sing I Can Only Imagine. We sang that song over and over again; it may not have been the best sounding, but it made my grandma happy and that was all that mattered. We said our final goodbyes and I love yous and left. When I left that hospital room, I told my grandma I would see her tomorrow and I believed that I was going to.. The few minutes the doctors said we’d have with her kept passing and passing and I thought that she seemed to look a lot better with the ventilator removed; I thought things were looking up for her. But then again, I was naïve the whole time. I didn’t think cancer would take her.

Suzanne Dawn Juran passed early the next morning on May 18th, 2014. It was a Sunday. I remember waking up for church and my mom telling me. I was heartbroken.. Just the day before, I had thought she was getting better, but I fooled myself. My mom asked if I wanted to go to church and said I didn’t have to if I didn’t want to and I said, “Grandma would want us to go.” I believe just my parents and I went that day and some people were surprised to see us there. Our church, like many others, starts out with worship and a few songs in, to my dismay, I Can Only Imagine starts playing. I started bawling. I knew right then and there my grandma Sue was telling me she was celebrating with the Lord and wanted to tell me hello. Every time I hear that song now I think of her.

My WHY for being on the board for Kickin Cancer is because I want to help educate others on ways to prevent cancer, ways to be healthy and to be there for people through this fight. I want to watch the numbers of people getting cancer lessen as the years go on and know I had a small part in it. I don’t want to continue knowing people who have been diagnosed with cancer because I want to have more memories with the people I care about. I want to try to make a difference. I know that my grandma would be proud of me for what I am doing with Kickin Cancer and I am doing everything I am in honor of her. She was and will always be a woman of COURAGE.