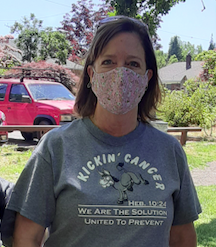 Humanity is fully intact” by Jill Anderson
With everything going on in the world today between the pandemic, schools shutting down and social injustice, it can sometimes seem like no one cares.  I have had the honor of meeting Baron Robison, and being witness to his dedication to bringing his best to Kicking-Cancer.

It started as a desire to support his sister and has turned into the strong organization it is today.  I am a trauma recovery coach.  I work with clients who are struggling with stress and anxiety. Baron has invited me to several events, and I would like to share my experience at two of those events.

The first event was put together to say good bye to a local tattoo artist who succumbed to cancer 10 days after the event.  At the event, I saw people come together who may not have known each other, but who all knew and loved Skunk, as he was known by. The friends who came to spend this time with Skunk had almost all been clients of his. Most of us spend so much time hiding our pain and struggles, and even often times hiding our joy.  The people who showed up were all wearing their beautiful stories on their arms, legs, neck, and/or chests.  While the meaning behind the imagery may not be clear, you know there’s a story behind every single tattoo and it means something very significant to them.

Skunk was both friend and confidant.  He was the one who got to hear what those stories as he created their tattoos. He held their confidences and their secrets.  Skunk was very weak at the event and in a wheelchair.  I saw people approach him and get down on bended knee to smile and hug their friend. The tenderness and respect were evident. When cancer strikes one person, it also strikes at all those whose lives have been touched by that individual.  Skunk touched so many. It was an honor and privilege to be witness to his celebration of life event.  I left there with the profound understanding of just how much he meant to so many.

Several months later, I was invited to attend a fundraiser, “Dancing4Doreen”.  Doreen is recovering and her lovely friends wanted to get together and raise money to help her with her expenses.  Her friends came in the form of musicians, who played for free, and the pub owner who donated money from the proceeds of food sold.  There were so many donations for the silent and live auction, it took up all the spare tables and over two hours for the live auction. They raised just under $5000.  It was a lively bunch and fun to see how much Doreen means to her friends and family.  During the live auction, a group of men, part of The Proud Boys, who had been protesting at the State Capitol showed up.  One of the members of The Proud Boys approached Baron, who was the auctioneer for the day, during the live auction. They hadn’t known about the fundraiser; they simply came in for food and drinks.  While listening to the auction and seeing all the activity, they had pooled their money together and donated just over $300.  They said they didn’t want anything from the auction, they just wanted to donate.

You can help too!